I can tell you from my experience that human beings are conformists. I experience it every day of my life. For 10 years now I’ve been a victim of government harassment. And the sheeple do what the government tells them to do. It’s just like what happened in Nazi Germany. The sheeple  follow the authority figure. They can’t think for themselves. As in Germany, they do what they’re told to do.

The Daily Sheeple
by Joshua Krause 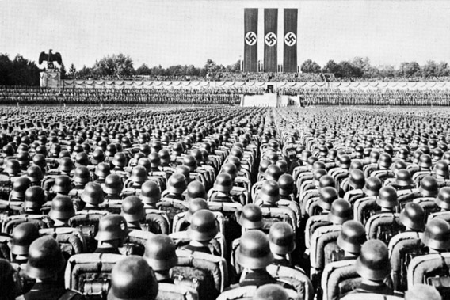 Throughout history, we’ve seen human beings accomplish wonderful things. We’ve also seen them commit unimaginable horrors. Members of our species have done things so heinous, that we’ve questioned whether we should consider them human at all. However, the most vile acts we’ve committed, haven’t been at the hands a few bad eggs. Often times, the worst of humanity comes out when we follow the herd.

When people find comfort and safety in the herd, they often begin to compromise their ethics for the “greater good”. It creates an environment where sociopaths can rise to the top, and the anonymity of the crowd gives everyone permission to act out against their fellow man. I would argue that more people have been killed or persecuted at the hands of conformity, than by any other human activity throughout history.

Adding to this dangerous behavior, has the been… Every day my life gets more and  more miserable.  I’m prevented from doing anything.  I can’t stand outside my apartment and enjoy some fresh air. I can’t really take a walk. They won’t let me get any sleep. They steal my food. Fill my apartment with pesticide.  Call me disgusting names.  Whenever I buy new shoes, they take them apart.  They rip my clothes. Fill my apartment with vermin.  All day and night, I’m hit with electricity.  They make fun of everything I say and do.  Tell me I’m ugly. There isn’t a minute of my day that someone isn’t abusing me in some way or another.

I can go on and on with the things they do to me, but the part that really bugs me, the perps make it seem that everything that happens to me I deserve.  Not only do I deserve what is happening to me, but they act as if  everything that they’re doing to me  is because I caused them to do it to me.  In other word, I’m being a bad human being and it’s all right for them to abuse me and make my life miserable.

We targets live the most miserable of lives.  I don’t think there’s a target out there who’s living a happy life. No matter how hard we try to make our lives better, the perps are right there to make sure we don’t have any moments of happiness.  Whatever happiness we had in our lives is gone.  We really have nothing to look forward to from day-to-day.  Just more misery every day.

We can’t celebrate holidays, take a vacation, work at a decent job, have privacy, friends, family, enjoy a day at the park, take a decent shower, just sit and think.  No, this is denied to us.  All we ever get to feel is misery.  From the minute we get up, we’re abused.  That’s all we targets have to look forward to every day  is abuse and more abuse.  The world is not aware of what’s happening, and, frankly, I don’t think it cares.  Just as people didn’t care about the Holocaust,  no one  cares about  what we’re going through. No one paid attention then, and no one will pay attention now.

We targets are alone.  No one is going to help us.  I know it’s depressing to read what I wrote, but it’s the truth. We targets don’t have a lot of good options.

Wake me up (Photo credit: Wikipedia)

There’s something we targets have in common. I think to myself   “what is it?”  I can’t put my finger on it.

It’s not race.  We’re of different races.   It’s not education.  We have varied educational backgrounds.  It’s not age.  The range in age is different.   And economically, we vary from very well-to-do to barely making it.  Professionally, we have PH.ds, writers, actors to people who are janitors.  And from what I deduce from reading other blogs, we’re not criminals.

Most of us have led normal lives.  That is, until our gang stalking began.

So what it is that lumps us all together?

The only conclusion I can come up with, is that we’re all outspoken.  I know I am.  We don’t stay quiet when we see something that we don’t think is right.  We’ve spoken up about things we should not have spoken out about.  I know I did.  We don’t keep our mouths shut. We’re a threat to the society we live in.  We’re not wanted because we’re not obedient.  We’re more likely to do what we want and not go along with the sheeple.  And this scares the government.  It can’t control us, so it’s  going to do everything in its power to beat  us down.   It wants to make us like the other sheep.  The sheep who don’t care what happens as long they have their t.v.s, and don’t have to be concerned with what’s happening in the world.  They believe that “mother government” will watch out for them and keep them safe.

Well, sheeple, you better wake up!  Because one day you’re going to wake up and discover  that “mother government” has total control of your life.  You’re going to  discover that you won’t even be able to go to the bathroom without permission.

You, out there, better start paying attention to what the government is doing.  Because if you don’t, you’re going to be very sorry you didn’t.

Oh, the word “sheeple”  is a combination of the word sheep and people.  It’s someone who just goes along with the crowd without thinking for him or herself.   A person who has a  herd mentality and acts like a sheep.