Texas, Texas, Texas, you should be ashamed of yourself! What next? A chip implanted in everyone so Texas knows where they are? The U.S. government is already doing that to a lot of Americans. I’m one of those Americans. 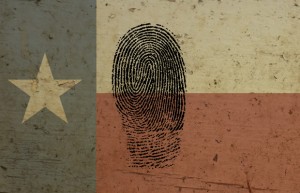 (In case you missed it…)

They’ve launched a plan to fingerprint every single person of driving age in the state, after which they will add the person’s prints to the criminal database.

Is it just me or is that a rather Dystopian plan?

The credit for breaking the news on those two items goes to consumer affairs columnist Dave Lieber of the Dallas Morning News, whose long-running “Watchdog” column often shows up in my Google Alerts, for obvious reasons.

As an old-school columnist, Lieber tends to keep his opinions subdued, and he doesn’t generally call people dishonest. But I have no problem with doing that, so I’d like to point out that the DPS spokesman he quotes at length is less than…